Kyokushin-kan’s Kaneko Shihan and Ishizawa Shihan performing the Bunkai for the final motion of Pinan sono 5.

(This author thought it would be beneficial to the Kyokushin-kan community to summarize, to the best of my ability, some content of Kancho Royama’s Internatinoal Instructors’ Seminars, held every year in Japan. Although I do have the dual advantage of having attended more of Kancho’s seminars than any other American, and of having acted as Japanese-English interpreter for those seminars in many cases, the reader should understand that, still, I can only do the best I can to explain concepts presented by Kancho and other high-level instructors in Japan. I do have the advantage of having been there, but my level of understanding in karate is only just what it is, and I can only explain what Kancho and others explain, through the lens of my own limited understanding. Yet to assist the development of Kyokushin-kan in the West, I will do the best I can.)

Bunkai means “application” in Japanese. It refers to a type of training, usually performed as formal one-step kumite, in which the practitioner studies the application of the individual movements performed duruing kata by applying them as defenses against the simulated attacks of a training partner . The practice of bunkai is a long-missing-from-Kyokushin, but vital, link between kata and kumite. For most the first 20 years of this author’s Kyokushin experience, I never practiced bunkai. Even in two years of training every day at Mas Oyama’s world headquarters dojo in Japan, we didn’t practice bunkai, certainly not in any way that compares to what is not being stressed at the cutting-edge of training within Kyokushin-kan. Yet knowing what I know now, I sure wish that we had.

In kata, of course, not only is there no opponent, there is also no partner. Those who practice kata have no choice but to visualize an opponent. The problem is that many of us fail to do so, and the movements become arbitrary. Karateka who have lost their way practice fighting, on one hand, and this bizarre karate dance called “kata” on the other. There is no connection without a study of how the precise movements of kata can be applied precisely to defend against actual attacks. In fact, one might argue that it is impossible to master kata, or even really understand it, without studying how to perfect the movements, and, furthermore, that one can’t effectively study the movements without applying them against attackers performing the corresponding attacks.

In an earlier post (cited in the Kyokushin Beginner’s Guide tab above) I mentioned how there were elements of Kyokushin that evolved during Mas Oyama’s lifetime, that there were others that devolved, and others that remained the same. Ikken, for example, mentioned in an earlier post here in the Kyoushin-kan Instructor’s Seminars section, is not something that was ever taught by Mas Oyama, but it WAS part of the original Kyokushin synthesis since Mas Oyama had exposure to Ikken prior to his founding of Kyokushin. Just like defense from face punches, which was all but lost during the era of Kyokushin’s golden age of world tournaments in which face punches were prohibited, the practice of Bunkai is not something that Kancho Royama and instructors of Kyokushin-kan are introducing to Kyokushin; it is rather a practice that is being re-introduced because it was all that karate was, prior to Mas Oyama’s creation of full-contact karate.

Sundomei karate (“sundomei” refers to all the non-contact styles of karate, including Shotokan) has kata and bunkai at its core. Hence all of the karateka who contributed to the formulation of Kyokushin who had prior karate exposure, including especially Mas Oyama, had extensive practice in Bunkai. In other words, it’s always been present in our training; it just hasn’t been emphasized until now, when our instructors at Kyokushin-kan are working to bring back some of what was lost along the way.

Before I take a break in this discussion and leave a Part 2 of a Bunkai discussion for another day, I will only pose the question: “what would be the meaning of kata and bunkai WITHOUT the full-contact type of training for kumite that we are more familiar with?” The answer, I think, is that it would be a lot less meaningful. After all, without the full-contact training for kumite, we would be just another sundomei style like Shotokan. However, let’s now flip the question and ask, “what is the meaning of full-contact karate without the practice of bunkai?”

My answer is that it would be a little bit better than the former case, but not by a wide margin. Mas Oyama always said “kyokushin karate is NOT brawling tough-guy karate, it’s Budo karate” yet if all we practice for is beating someone else up in a tournament, that’s all it is. Training only for competition in which there are rules to protect the competitiors, and the melee is always one on one is limited in terms of what the practitioner can learn about self-defense. What if in the self-defense situation, the karateka is facing 5 attackers? What if they’re all armed? Certainly, they’re not following any rules, because in life and death there are none. No, this author is convinced. After ten years of seminars with Kancho Royama and Kyokushinkan, there is no way to master even full-contact karate without the practice of Bunkai. 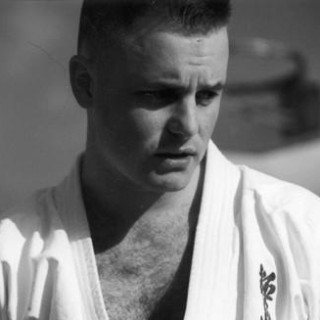 The Budo Karate West blog is a publication of Ligo Ink. Unless otherwise stated all material is written by Nathan Ligo. All rights are reserved, however, we invite anyone who will link back this site to use any material posted here if their intent is to further knowledge of Kyokushin-Kan and Mas Oyama's Budo Karate. Please just quote your sources.
Loading Comments...
Comment
×
%d bloggers like this: